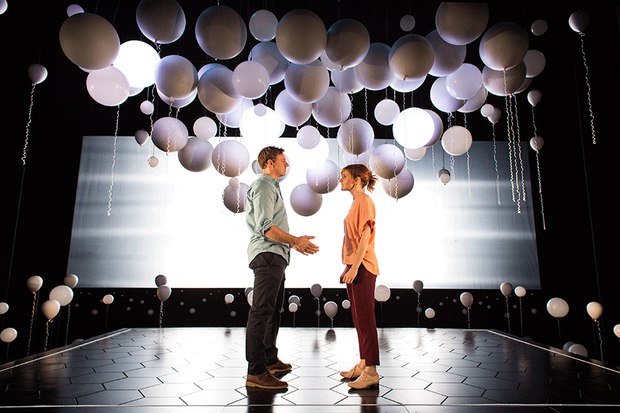 Matt Trueman wrote a thing not too long ago about heartbreak, and finding the emotions you want or need to feel when you are watching theatre.

Sometimes, though, you just so happen to stumble into a show that is actually about the things in your life right now, no searching needed to find your own feelings.

Constellations is about a couple. Marianne, a cosmologist, explains that the multiverse theory puts forward the idea that there are an infinite number parallel universes, each of which contains the outcome of a thing that did happen or the outcome of one of the millions and millions of things that did not. Constellations shows a microscopic fraction of the universes Marianne and her beekeeper boyfriend Roland inhabit, in which they get together or don’t, cheat on each other or don’t, break up or don’t, choose to die now or don’t.

Staccato style scenes begin, play out, then flicker back to the beginning of the scene to explore different possibilities and parallel universes. The tone switches from warm and joyful to melancholy with some speed, and although it is a pretty, delicate, occasionally very funny thing it is not more invigorating than watching an above-average rom-com separating itself from the rest by using science as a framing device. I’m calling Lone Scherfig as director for the film adaptation.

But despite it being good but not amazing, I feel a really deep affection for it.

3 weeks ago, my boyfriend and I broke up and it was pretty fucking shit. The last 3 weeks of my life have therefore been plagued with big ‘What If’ questions about what I should’ve done/said/cried less about to make it better.

In one week, my mum will go for a CT scan to investigate the sharp headaches she has been having recently. My brain is spiralling around all of the possible paths that this may lead her and my family down over the next little while.

So Constellations, with its rocky central love affair and brain tumour based ending, felt like it was for me right now. It felt like the average rom-com you watch when you feel sad and just need to eat ice cream because it makes you feel safe.

At times, Constellations is pretty fucking bleak. But everytime it turns to sadness, it is at least offering you the notion that somewhere, in a parallel universe, everything is just as you want it to be.